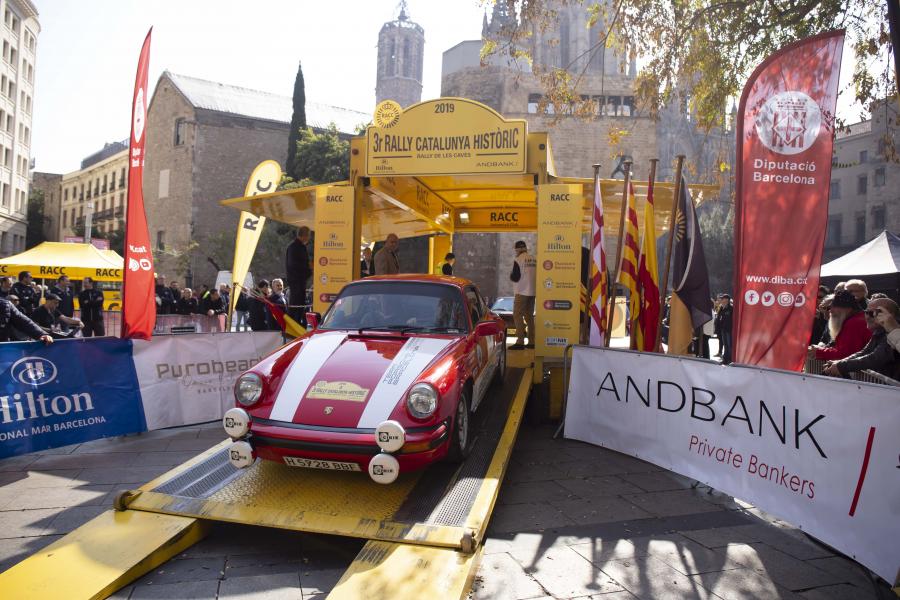 The crews will cover 610 km including 14 regularity stages, many of them surrounded by vineyards

During the two legs against the clock, the entered classic cars will cover regularity stages along the regions of Anoia, Bages, Alt Camp, Alt Penedès, Baix Penedès and Conca de Barberà, following a linear route. Participants have 610 km ahead, including 14 special stages of regularity, making up 152.87 km, all of them different and on closed roads. The event will finish tomorrow, Saturday, at 19.30h at Hotel Hilton Diagonal Mar Barcelona, followed by the prize-giving ceremony and the gala dinner.

The third edition of the Rally Catalunya Històric, recalls the Rally Catalunya-Rally de les Caves' organised by the RACC for the first time in 1973, as a scoring round towards the Spanish championship. Therefore, the RACC carefully designed an itinerary according to the condition as a premium rally, in which the vineyards will be playing an important role, especially on the second day.

6 Stages on Friday and 8 on Saturday
Today, Friday, participants will cover 6 stages (Font Rubí, La Llacuna, Querol, La Joncosa de Montmell, Les Ventoses and Montagut), with a regrouping after the fourth stage in El Vendrell, where they will spend the night. They will be staying at the hotel Le Méridien RA, where the parc fermé will be set-up from 20.50 hours.

On Saturday, the rally will be restarted at 9.00 hours, to face the longest leg with eight stages that make-up a total of 87.05 km of regularity (Vallespinosa, Savallà-Conesa, Puig de les Agulles, Pontons, Can Ferrer, El Pont d'Armentera, Òdena and Talamanca). Worth to be mentioned is the fact that some of the stages included by the RACC in the itinerary are stages that are raced during the RallyRACC in the world championship. On that day, participants will regroup in El Montmell, at mid-day, where they will also have lunch.

The rally is expected to finish at 19.30h at the parc fermé in Hotel Hilton Diagonal Mar Barcelona, venue of the gala dinner and where the winner of this edition will be made known, in addition to giving the prizes to the top classified crews.

Regularity Specialists
There are several candidates to take the honour positions of the rally, considering that the entry list includes a large part of the best regularity specialists of the country. Carles Miró-Ivan Matavacas (Porsche 911 SC), winners of the first edition, have already announced that they want to repeat the victory ahead of renowned drivers like Salvador Cañellas, who will be joined this time by a valuable co-driver like Carles Jiménez (Seat 124 Especial 1800), or Antonio Zanini-Joan Jordan, who will be covering stages they know very well at the wheel of a Simca 1200 TI. We should not forget that Salvador Cañellas was the first winner of the Rally Cataluña-Rally de las Cavas (1973) and that Antonio Zanini is the holder of the most number of victories of the same race, a total of five (in the 70s and 80s).

The entry list does also include Josep Mateu and Xavier Pérez, RACC President and General Manager, respectively, who will be at the wheel of cars from the team SEAT Coches Históricos. The oldest vehicle of all those entered is the Loto Elan (1962) of Sergi Francolí-Josep Maria Francolí, and there are 8 crews from France and 1 from Belgium.

The 3rd Rally Catalunya Històric-Rally de les Caves counts on the official sponsorship of Hilton Diagonal Mar Barcelona and Andbank; and the Barcelona County Council and the El Vendrell Town Council as institutional sponsors; the support of the Town Councils of El Montmell and Barcelona, and the collaboration of Blunik, Sport and AutoHebdo Sport.

The authorities who gave the start to the vehicles today, included Maite Fandos, Sports Delegate of the Barcelona County Council; Gabriel Arranz, Director for Promotion and Events of the Barcelona City Council; and Santi Siquier, Head of Territorial Sport Action of the General Secretariat for Sport. Attending as well were Raúl Martínez, Andbank Managing Director; and Joachim Hartl, Hilton General Manager for the Iberian Peninsula.