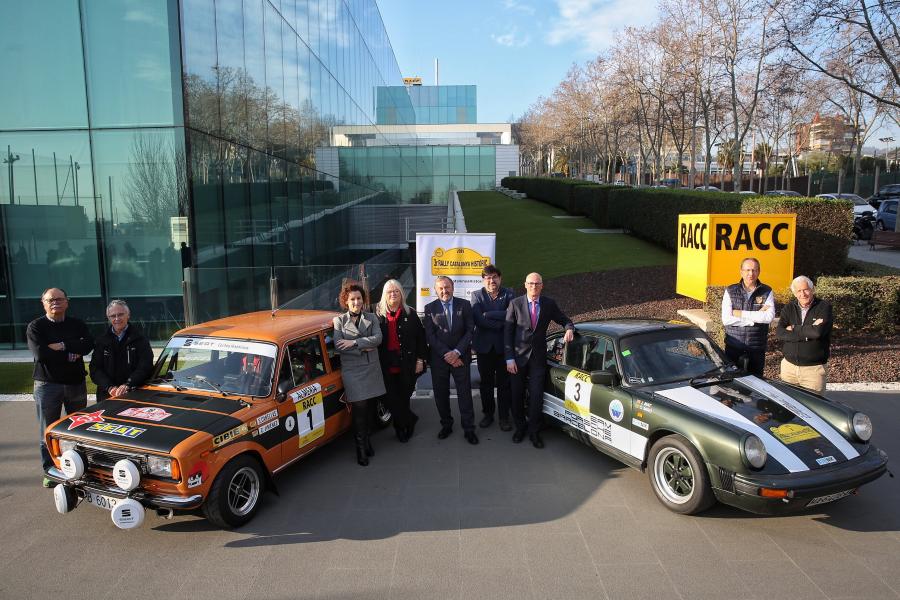 44 vehicles will take the start at 12.30h on Friday 1 March from Avenida de la Catedral in Barcelona

The itinerary of the 3rd Rally Catalunya Històric, the regularity race for classic cars to the staged on 1 and 2 March was unveiled today at the RACC headquarters. The third edition of this rally, organised by RACC, will recall the legendary "Rally de les Caves" that was staged from 1970 to 1983, and later evolved to become the current RallyRACC.

The launch of this Premium Rally was attended by a large part of the drivers and co-drivers who will be taking the start next 1 March in Barcelona. The entry list, which has also been presented today, has a total of 44 teams.

Day 1: From Barcelona to El Vendrell
The 3rd Rally Catalunya Històric-Rally de les Caves will consist of two legs with a linear route of 610 km and 14 regularity stages (none of them will be repeated), 6 to be covered on the first day and 8 on the second. From the start podium, the crews will continue to Subirats (Mirador de les Caves), and after having lunch they will depart to the first stage "Font Rubí" (4.51 km), that will start at 15.36h. This special will be followed by "La Llacuna" (7.02 km), "Querol" (21.31 km) and "La Joncosa del Montmell" (18.21 km). After a 20-minute regrouping in El Vendrell, the penultimate stage of the day will start at 18.58h, "Les Ventoses" (8.01 km), and "Montagut" (6.76 km) will be closing the day finishing at the parc fermé that will be set-up from 20.50h at the hotel Le Méridien Ra de El Vendrell, where participants will spend the night. The crews will have covered a total of 270.56 km, including 65.82 km of regularity.

Day 2: Racing through the vineyards
Saturday, 2 March will be a marathon day. The participants will start at 9.00h from the hotel, with a checkpoint in El Vendrell at 9.25h. The first special of the day will be "Vallespinosa" (6.17 km), in a surrounding that will already have vineyards as its main feature, honouring the nickname of the event, as it happened in the 1970s.

The next specials will be "Savallà-Conesa" (13.88 km), "Puig de les Agulles" (9.43 km) and "Pontons" (5.91 km), before the regrouping and lunch in Aiguaviva-El Montmell, where participants are expected to arrive at 12.42h, to make a 2-hour break and to let participants recover strength to face the final part of the rally. This final part will consist of four additional stages, two long ones, that may turn out to be very selective, considering that in regularity races nothing is determined before the end of the event: "Can Ferrer" (13.76 km), "El Pont d'Armentera" (21.56 km, the longest special of the rally), "Òdena" (7.48) and "Talamanca" (8,86 km). After this last stage, they will continue to the final parc fermé, located at the Hotel Hilton Diagonal Mar Barcelona.

Gala dinner at Hotel Hilton Diagonal Mar Barcelona
This spectacular setting will be the venue of the prize-giving ceremony and the gala dinner of the Rally Catalunya Històric, starting at 21.30h, with the attendance of the authorities and all of the participants.

The top three overall will get the desired "R", the RACC Special Trophy, just like the 4th and 5th crews in the overall classification. Trophies will also be awarded to the top crew in each class, the top foreign crew, the top RACC member crew, the crew with the highest age adding the ages of driver and co-driver, and the crew with the oldest vehicle, provided that they finish the rally. All crews that manage to cross the finish line will receive the Finisher Trophy'.

A first-class selection of drivers and cars
The Rally Catalunya Històric-Rally de les Caves has a list of entrants with an experience and vehicles that turn it into a true first-class rally.

After the scrutineering and the administrative checks on Friday 1 March, from 9.00 to 12.00h at Avenida de la Catedral in Barcelona, the first team to drive down the start podium will be the SEAT Coches Históricos duo, made-up of Salvador Cañellas and Carles Jiménez, at the wheel of the 124 Especial 1800 Group 4 replica from 1977. Behind him, and at 1-minute intervals, the rest of the caravan will be taking the start, led by another star driver like Antonio Zanini, who will be joined by Joan Jordan at the wheel of a Simca 1200 TI from 1978 in the fight for the top position of the rally. We shouldn't forget that Cañellas was the first winner of the Rally Catalunya-Rally de les Caves (1973), while Zanini holds the record of Rally Catalunya-Rally de les Caves victories, a total of five.

But these driving aces won't have it easy, as the entry list is filled with great regularity specialists, such as the duo Carles Miró-Ivan Matavacas (Porsche 911 SC), winner of the first edition of this rally in 2017, who will be taking the start in third position. Other outstanding entries are the Nenas Team' with Tere Armadans-Anna Vives (VW Golf GTi) who have already won several awards; Joan Pedragosa-Josep Beltri (BMW E21); Francesc Segú-Joaquim Segú (Porsche 914/4, with which they raced the Rallye Monte-Carlo Historique a couple of days ago); Marcel·lí Martí-Carles Datsira (Morris Mini Cooper 1300); José Manuel López-Gerard Ferrer (VW Scirocco); or Josep Maria Molas-Ramon Ferrés (Ford Escort 2000 RS), in addition to many more.

Among the entrants, there are eight French crews with vehicles that always attract the fans' interest, such as Alpine-Renault A310, Austin Mini, Volkswagen 1303 S, several Porsche models and even a regular Belgian driver, Bernard van den Broeke, who will be racing together with Lluís Sales in one of the two impressive Alpine-Renault A110 that appear on the entry list. The oldest participating vehicle is the Lotus Elan from 1962, driven by Sergi Francolí and Josep Mª Francolí.

The 3rd Rally Catalunya Històric-Rally de les Caves counts on the official sponsorship of Hilton Diagonal Mar Barcelona and Andbank; and the Barcelona County Council and the El Vendrell Town Council as institutional sponsors; the support of the Town Councils of El Montmell and Barcelona, and the collaboration of Blunik, Sport and AutoHebdo Sport.